Midge Ure, and The Spirit of Black Pussy

My use of the word "pussy" to describe the feline species is often met with gross misinterpretation. I credit Mrs. Slocombe of the British sitcom Are You Being Served? for her proper use of "pussy" in the English, not American, vocabulary. In the event that I offend someone, Fantastic!

The year of 2012 was one of great endurance and transition. My Mother passed away in my arms minutes after Dick Clark. A month later, Donna Summer went. On New Year's Eve, my beloved pussy of 13 years, Adam, made his Departure. Everyone affiliates New Year's Eve with Dick Clark, but it is also the birthday of Donna Summer.

I needed a break from it all, and went heading North to see Midge Ure perform at Cleveland's Beachland Ballroom. Following Midge's performance there in 2002, he announced to the tavern attendees, of which there were 46, "See you in ten years!" He was keeping his word.

With cooperative weather, I started my trek by swinging through the Centerville Post Office on Paragon Road to drop off mail. At the front of the entry driveway lay a freshly-hit black pussy streaming its liquid red life onto the street.

I arrived in Cleveland in what felt like no time, despite the four-hour distance. With time to spare, I ventured down the street to dine at the ever-popular Muldoon's, with its always-gratifying Irish Egg Rolls. Psyched about the Midge Ure show, I ate rapidly, then went back to the Beachland Ballroom, whose doors weren't scheduled to open for another hour.

Beside the Beachland Ballroom is an actual record store appropriately named Music Saves, complete with new, freshly-pressed albums. With time to spare, and a curiosity, I entered the shop, only to be subject to a communicative black pussy on the album racks named Vinyl, looking much like my dearly beloved Adam. Vinyl kept encouraging me to stroke her, and even posed for some photo ops. 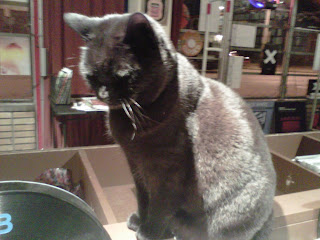 After leaving Vinyl and Music Saves, I went back into the frigid Cleveland lake effect to wait for the Beachland Ballroom to open the doors. Once inside, instead of a ticket for admission, my left hand was stamped with a paw print. 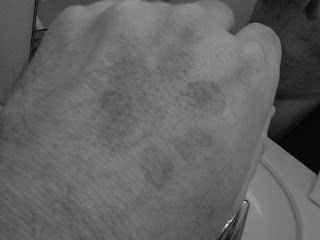 The following night, in Detroit's 'Fashionable Ferndale' ala Melrose, Midge Ure was playing at another intimate venue called The Magic Bag. Its logo is a black pussy, and the interior light fixtures feature steel plates with cat eye carvings. 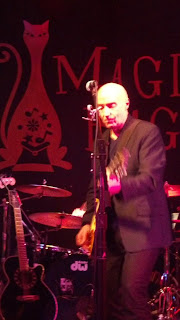 My guest that night was pointing out all the pussy in The Magic Bag. She is a witness to many of Mr. STONEking's paranormal events, including ones in Point Pleasant, West Virginia, land of The Mothman Prophecies.

In December 2002, I was sitting in the lobby of The Lowe Hotel in Point Pleasant, West Virginia with the owner, Ruth Finley, and a hotel resident, who was working the ultra sound at the local hospital. She was telling Ruth and I of her Midge Ure interest, as she was planning to make a trek to some massive event in the UK featuring Midge Ure and Howard Jones.

Ruth Finley made mention of a Cleveland band staying on the top floor that night at The Lowe Hotel. At that moment, an entourage was coming down the stairs. Introduced with my head tossed back politely, I asked if they ever play the Beachland Ballroom? A tall man with flowing red hair exclaimed, "Play it? ! I work there!"

As I spun around, he recognized me from two months prior, this time in casual street clothes, unlike the Flintstone fur and bones I wore then merely to stay extra warm.

To his band mates he exclaimed, "Guys! This is who you want to party with! He dressed like Fred Flintstone at the Midge Ure show!"

Back in 2010, Midge Ure granted permission for Mr. STONEking to open the live recording benefit fund raiser for Outreach for Animals with his Rockin' instrumental "Monster", to which Great Thanks is is still given.

As for The Spirit of Black Pussy, and the relation to my dearly departed, and all represented with his charming nature, please pay homage to him and his cameo appearance by viewing "You Can Run".

My pussy's Spirit remains alive in the corridors of my homestead, and also along the path up North for the Midge Ure shows.

I am Walking Proof.
Posted by Mr. STONEking at 12:28 PM No comments: