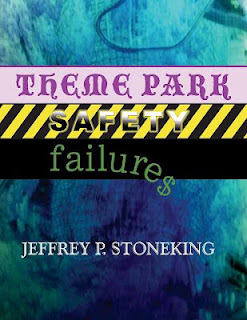 Theme Park Safety Failure$, the 2012 version, is now available on Kindle. Discover what happens to innocent park goers when something goes awry, and how clueless ride operators are when emergencies occur. As one who was injured on a new ride in 2010, two years after the paperback version's release, I am Walking Proof that safety is not a priority or concern with park owners, ride manufacturers, inspectors, and elected officials. There is a Warning label on this book for a reason.

I seldom visit Wal-Mart, perhaps six times a year, only to purchase two items.  On Thursday night my cell phone’s vibration went off, and I looked to discover a forwarded message from Antioch’s President Fishbein about a memorial service for Don Wallis.  It was a surreal moment, and I forgot where I was and what I was in search of.
Don?  Really? ‘No Way!’ I thought.  He was on my mind earlier in the week as I was preparing one of my published works to go digital.
Arriving home, I started flashing to all the moments I shared with Don.  He taught my second class at Antioch University in Winter of 2005, Self and Society.  It was both he and Diane Chiddister who praised my writing capabilities, each encouraging me to pursue the talent.  Don’s assignment was grueling, requiring thirty-five pages of childhood memories.  I dove into it with great passion!
Those pages, forty-two by the time I finished, became the start of my first published book, Reality Therapy:  The Influence of Rollercoasters, Religion, and Rock ‘n Roll.
The following year, I worked with Don on an independent studies course, Lives In Tranition, which produced my third book in a year’s time, On-Going Sagas:  A Testimony Of Events.   When I completed the manuscript, I paid the Yellow Springs post office to accept it over the counter.  Several days later, I saw Don walking the sidewalk as I was slowly cruising by.  I yelled a greeting out the open window, and heard Don yell back, “Good job!”
During the delivery of the published product a couple months later, I followed Don into a restaurant, and upon his turning the book over, and seeing my head surrounded by a halo, he pointed and Roared with laughter!
All these memories came flooding back to me, for it was Don who saw my hidden potential.  I believed in him.  He was genuine, real, and always expressive.
Don is also the one who allowed me to pursue my Native American studies, and invited Thomas Maroukis of Capital University to speak of his personal experiences on the Westeren reservations.  That same day I brought my ultra-opinionated mother to class.
With these memories swirling about me, I wept myself to sleep.  No one ever took the time to compliment my talents and efforts before Don.
Venturing the next afternoon to Antioch campus, the only one as far as I am concerned, I was elated to discover my favorite parking space available, providing me with a distant walk across the hallowed grounds to the Glen Helen building to pay homage to this kind, gifted man.  So many individuals filled the interior to a standing-room only setting.  Photographs depicting Don’s colorful life went passing by on the projector’s screen, and the memorial service began with a moment of silence.
The first speaker was Thomas Maroukis, bringing my personal memories full circle.  So many other people shared their experiences with Don from over the course of his seven decades of living, their stories echoing certain elements of my own.
I left afterwards, walking Antioch campus alone under a glowing moon casting its light through the high-reaching branches of the aged wintry trees.  A halo was distinctly visible about its near-fullness, and the memory of Don pointing and laughing at my own halo on the back cover of my book brought a vocalized outburst from me as I passed beside the crown jewel of campus, whose spires begs one’s eyes to look upwards.
With a function transpiring in South Hall, the same building where Don led the Self and Society course not so many years prior, I walked inside, and headed directly up to the third floor’s vacant hallway.  Sitting on the interior window ledge, the Spirit still lingering inside seemed to ask, ‘Where have you been?’
I then wrote a text to a remarkable friend I also met in those very classrooms during that same time.  His words stand as a strengthening testimony for all who Don Wallis came in contact:
“Rejoice in knowing God brings people into our lives when they are most needed. Don helped you on your journey, and be grateful for that blessing.”
Amen. 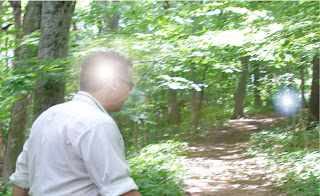 Posted by Mr. STONEking at 5:35 PM No comments: